How to Build Your Own Litter Box

The litter box has long been the bane of cat owners everywhere. Dog owners can just let their pups outside to do their business, but cats need their own private space—and each cat is a little bit different. Some prefer a cover on their litterbox, whereas others like the fresh air. Certain cats like dusty litter for digging in, and others prefer the contemporary clumping stuff.

No matter what your current litter box looks like, you and your cat both probably have a few complaints about it. Perhaps it’s not very good at keeping the odor in, or maybe the sides aren’t high enough for your feline’s liking. It could just be that no litter box on the market really suits both you and your pet’s needs. If that’s the case, we have a solution: build your own.

You might think that building a litter box would involve a hammer and nails, and maybe some level of handiness. You’d be wrong. There are a handful of DIY ideas that require only about $10 and a utility knife, like this DIY Mess-Free Cat Litter Box by blog Musings. Put down the screwdriver and back away from the power tools—you won’t need them for this project.

Erika, the woman behind Musings, decided to reinvent the idea of the litter box when the family cat’s trusty, time-tested litter box broke. The flap that once separated their furry friend from the outside world had fallen off, and she was starting to drag litter across the living room every time she used the facilities. So Erika created a brand new litter box using just an 18-gallon Rubbermaid plastic bin (or any other brand), a plate, and a durable set of scissors.

This DIY litter box is as easy as tracing the outline of the plate with a permanent marker and cutting out the circle with your scissors. Before you put the lid back on the container, fill the bottom with litter. Once the lid is affixed, your kitty will be able to climb in and out of the litter box as necessary—which will also help keep her muscles and bones strong and healthy. If she does track any litter out of the box, it’ll end up on the top of the lid, where you can easily dispose of it—and not on your floor.

The Pet Project Blog puts its own spin on the Rubbermaid litter box. First of all, this crafter suggests using a larger plastic bin, 25 gallons—more room for your cat to stretch. Instead of cutting a circle out of the top for your kitty to hop in and out of, you cut a trapezoidal door in the side. This might be easier for older cats to navigate, and it should still ensure that most of the litter remains in the box when your pet scrambles out.

Are you more worried about the way your litter box looks than how it functions? Check out this wine case litter box. By cleaving a wine case in half and attaching a hinge, this stylish DIYer hides the litter box and keeps his feline friend from making a mess when he steps out of the bathroom. 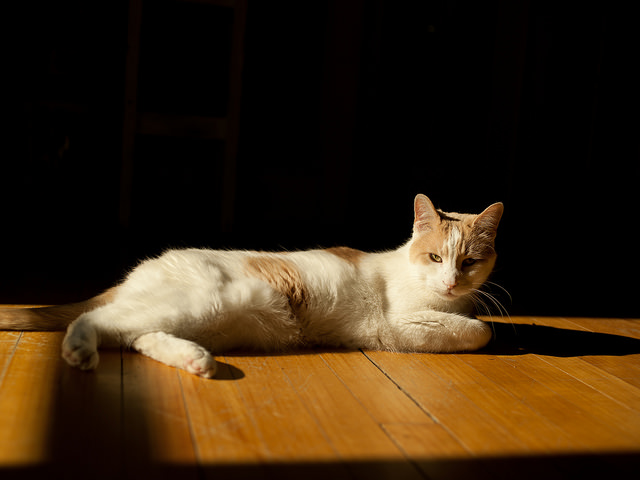 « How to Make a Sports Ticket Scrapbook for Your Child

Family Fun Guide: A Day in the Park »