The Outside Just Outside Your Door – New York Edition

The Big Apple. The City That Never Sleeps. The City So Nice, They Named It Twice. New York City goes by many names, and yet none of them mention its opportunities for outdoor recreation. Anyone who lives here knows that that’s a pretty big oversight. The Big Apple may be best known for its theaters, restaurants, and department stores, but New Yorkers have almost as much access to the great outdoors as their suburban neighbors-and that fact should be celebrated. Which is precisely why we’ve compiled this list of the hottest outdoor spots in your city.

No NYC tour of the great outdoors would be complete without a stop at Central Park. This iconic greenspace is more than just a community park; it’s an integral part of the city’s history. New York State’s legislators established the park in 1853, devoting 750 acres of grassy lawns and shady woods to what would become Central Park. Ever since, city dwellers have fought to keep the park protected and well maintained. Thanks to their efforts, you can still take your lunch at this massive park right in the heart of Manhattan. Check out the Alice in Wonderland fountain while you savor your sandwich or head to the Balto statue and gaze at the intricate craftsmanship on your break. You can even swing by the zoo, stop and smell the roses in the Shakespeare Garden, or spread out a blanket and sunbathe on the Great Lawn.

Central Park isn’t the only place to escape the city without actually escaping the city. The High line is another solid option for getting your daily dose of vitamin D. Back in 1934, the High Line was part of the industrial movement in New York City, conveying goods via train to and from an economically thriving part of the city. However, by the 1980s, trucks had taken over most of the trains’ responsibilities. And so the High Line fell into disrepair until 2006, when work began to restore the High Line with a new mission: a park. Today, you can go for a stroll along the former train tracks and enjoy beautiful gardens and breathtaking views along the way.

From up on the High Line, you’ll probably be able to see Brooklyn Bridge Park, another popular outdoor space in the city. Its various piers each offer something a little different to visitors: a day at the beach, a spin on the carousel, a spin around the roller rink. Brooklyn Bridge Park also constantly updates its schedule of events, so there’s almost always something going on when you visit, whether it’s a festival or a movie along the water.

The same could probably be said of Brooklyn Bridge Park. In the summer months, this park hosts everything from barre classes to professional juggling performances. But whether there’s something special going on or not, you can always drink in sweet aromas in the gardens, gawk at towering London plane trees (the same you’d find at Jardin des Tulleries in Paris) along the Promenades, or just lay out a blanket and sunbathe on the lawn. 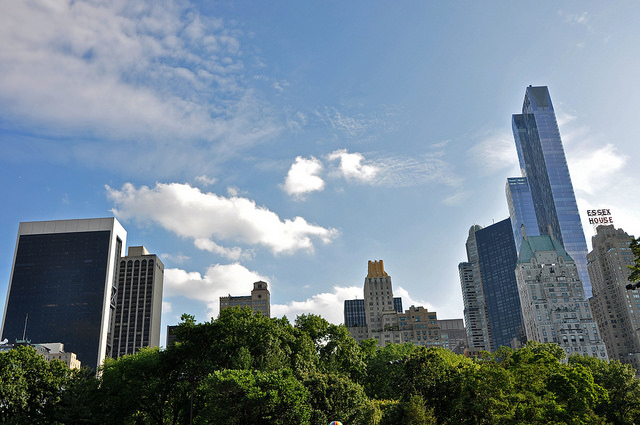 « The Outside Just Outside Your Door – DC Metro Edition